to try to condense the past week into one post would be a disservice.  so here are a few random tidbits.  It was another Full Circle thing…i was assigned the same cabin that i stayed in the very first year i went to this art retreat.  there were connections and wine and rooms filled with laughter - one more laugh and the walls would have given way - nails unable to hold the 100+ year old boards in place.  the workshop i had hoped would crack open the dead shell of my creativity - did.  and skipping ahead, the instructor lives a stone's throw away from the very first woman i went to these woods to learn from all those years ago.  true story.
it is difficult to return to a place where there are expectations - whether they be ones put on you, or ones you don as a uniform when you are in situ.  when i first arrived, those many years ago, no one knew me and i knew no one.  they say the further from home you get, the more like yourself you become.  true story.  but as i returned to that spot year after year, and met up with those original new friends, i picked up where i left off - not allowing myself tender new growth, and expecting the same experience.  it took a few years away, to be able to return as my true new self…soft edges, tumbled smooth by the years transitions…my true new self - who knew no one, once again, and decided to chuck the uniform and be my deepest self.  yes.
i learned to listen a bit better - still hard for me to stop the chattering at times.
i learned to let people be.  just be.  and…
i learned that i do not need to like everyone, even if i know they are simply expressing their pain in the only way they know how.
i learned that there is no need to overshare…in watching a mirror of my former self, i cringed, but knew there was no way to stop that train once it left the station.  i want that woman to know that she was welcomed, simply by being there - that there was no need to try so hard, and besides - who cares if someone likes you?  the ones you connect with are the ones that you have most in common with.  they are your tribe. and you don't need to try.  there is no point.
i learned that i need to have women around me…great swirling groups of creativity and laughter and good food and all the scents and smells of the marketplace - BUT i need my own private space to rest in.  (this is meant for my continuing life NOT my roommate, who was wonderful and interesting and wildly talented).
i learned that a car breaking down on the way home can create a much needed 100-percent down day of rest and laundry and art at home.  that a hard landing can be something to be grateful for (well, i'll get back to you on the Full gratitude after i get the bill from the mechanic).
i learned that i need to write down some of the stuff that comes out of my mouth.

i had the very distinct honor and privilege of watching another brave woman start at my beginning, and leave the week and the woods with wings on her feet.

thank you for this week.  i have a date with Henry now, and he really is excited about going for a walk.
be well…be grateful…be yourself. 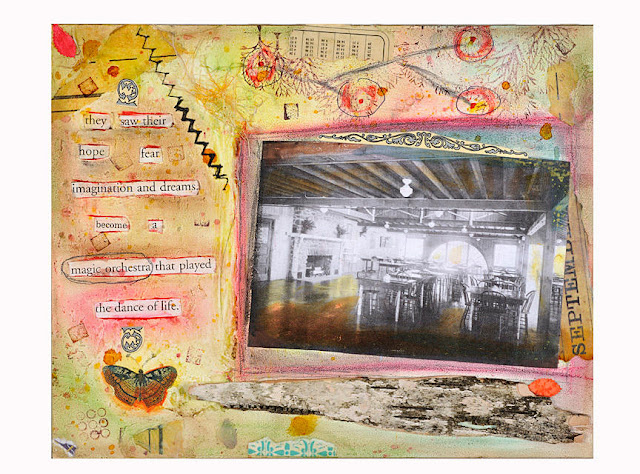